Pind Bhaba Trek - Trekking in the Himalayas
4.8 rating based on 1,234 ratings

The mountains were calling and a bunch of us friends wanted to begin trekking again. Based on insights and options by Tapas from My Himalayan Adventure, we decided to embark on a moderately difficult trek on the Pind Bhabha pass. Tapas from My Himalayan Adventure arranged for an experienced cook and helper who doubled up as our guides as well. We met at the beginning of our journey in Chandigarh.

Of course, this was a great research trip for India Someday! We are glad to say that we can definitely recommend and help plan this trek for all adventure seekers out there. 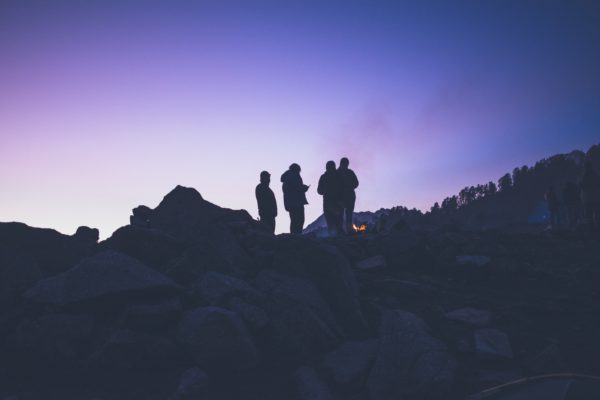 Having flown into Chandigarh, we met up with our guides and drove up in the Himalayas towards a small mountain village Kafnu. We had hired a Toyota Innova (read more about car hire in India) but would recommend a Tata Sumo or Tempo Traveller as the camping equipment take up a lot of space. We stopped for lunch at the famous Giani Dhaba in Dharampur and then made our way to the planned stop for the night, a small town called Rampur. But as evening set in, so did the mist. Unable to drive further, we halted at Aya guesthouse in Narkanda. The guest house was INR 700 a night for a simple room with hot water and a TV. 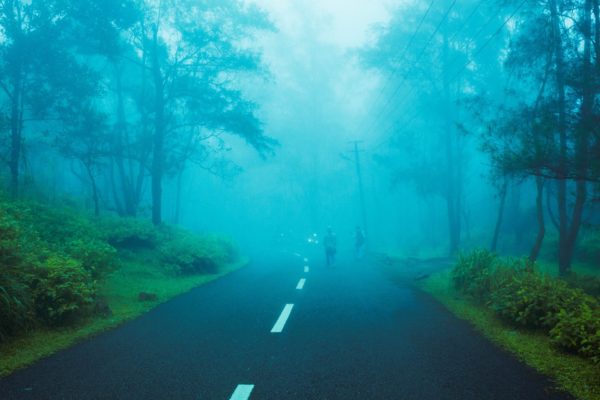 Starting not too early at around 08:40 hrs, we made our way to Kafnu (the base village for the trek). We had to stop for our daily rations and food, in a small village of Jhakri where we got almost all the essentials other than cheese. That was quite a disappointment. Though it were only 120 odd kms, it took us nearly nine hours.

The guesthouse in Kafnu was not too clean but we were too tired to complain. At Kafnu, we met the local guide and his brother who also helped us arrange for horses to carry the tents and bags, etc. We had an early dinner and got ready for our four-day trek across the Kinnaur region of Himachal to the barren Spiti region. 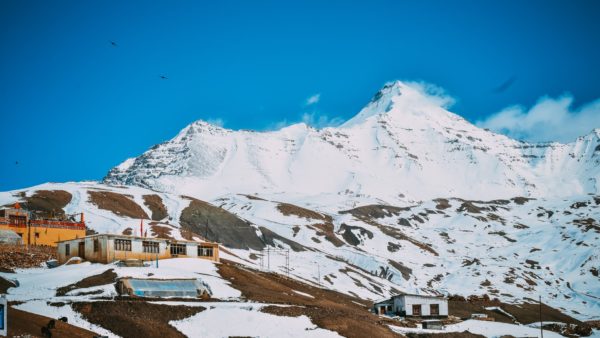 Early morning, we had a nice hot water shower, our last one for the next few days. The horses and guides came to pick us at the guest house. We parcelled some fantastic Aloo Parathas for an incredible deal-INR 15 and we were off! The weather was a little overcast and there was a slight drizzle. Expecting this, we had all our bags wrapped in rain protective gear. The first km was till the end of the village post which, we crossed over a small bridge and entered a dirt path with the forest on one side and the river flowing on the other. It was a nice gradual inclined walk, not very strenuous. As we continued on this path, there were two large ice blocks through which the river was flowing. They were really scenic to look at. We stopped nearby to grab our breakfast and a well-deserved break.

As we continued on, we had a steep climb in the forests and the constant rain was being blocked by the trees. The forests then gave way to a meadow with different coloured flowers on either side. There was then another couple of kms long walk through the forests with a fun bamboo river crossing.

After a steep ascend, we finally came into a Game Of Thrones and Lords Of The Rings like locale. Massive green meadows, lots of cows grazing, high mountains bearing down on us from both sides and the ever-faithful river dividing the land in two.

We found a forest lodge there which was empty and we set up our sleeping bags right in it. This worked out well as the rain and cold would have not gone down too well with our city addicted bodies. We climbed 6 hours in and went from 7900 ft to 10400 ft. 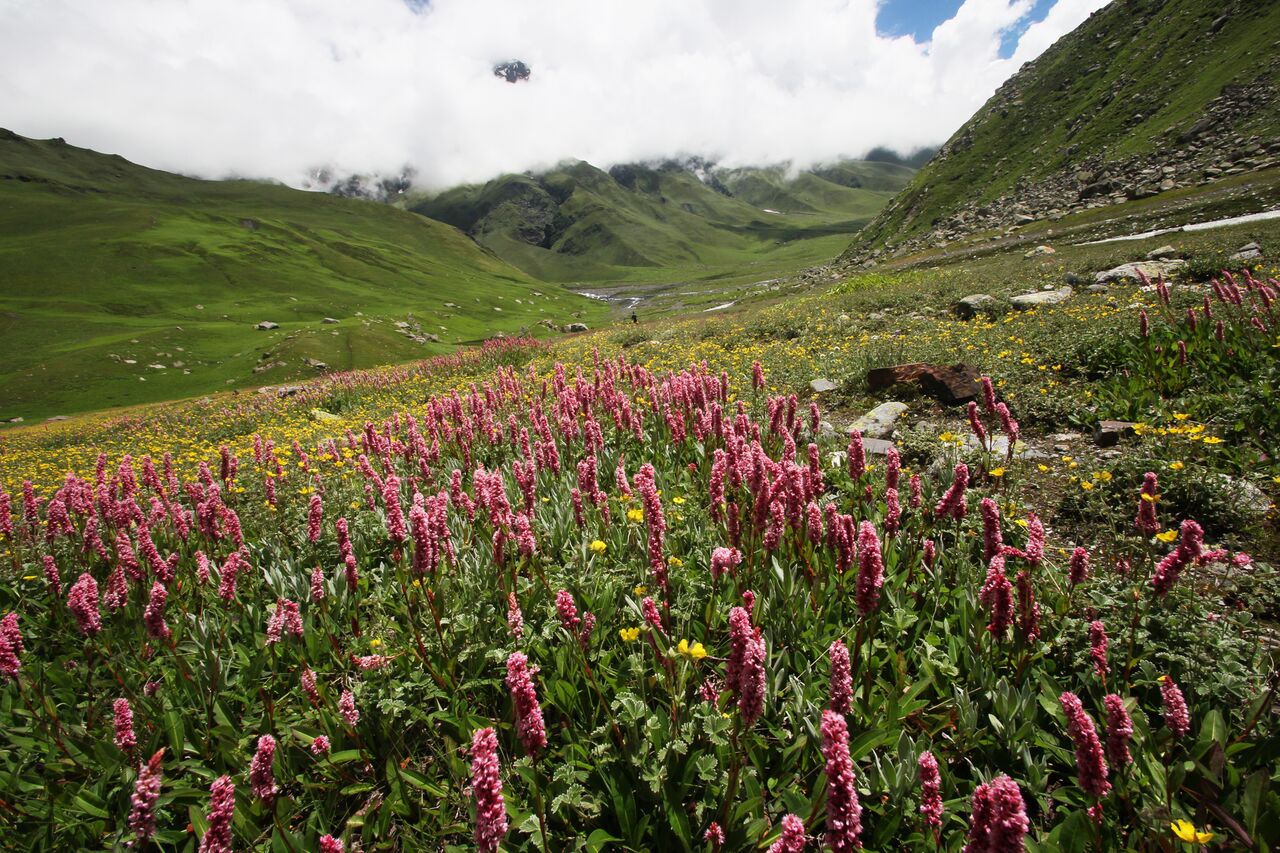 A scenic view of flowers accompanies the Pind Bhaba trek

We had an early start like yesterday, we decided to cover two days worth of the trek into one. To acclimatize a little better, we should have broken our stay and stopped at a place called Kara but we decided to push for it and combine the two 6 km walks into one day and end the trip at Phustirang. We started early morning to ensure that we reached on time.

The beginning of the walk was pleasant through big boulders and forests post which we hit the meadows. We spent a little too much time at one part as we had a little incident with the drone here (stunts like these in the mountains wasn’t our best idea) as there was too much wind, and we crash and burned. The meadows were laced with river crossings which were a little tricky. We were glad that there was enough sun to warm us up rather quickly.

From the meadows, we had another steep climb until a glacier which we had to cross. I was a little nervous while doing this, but the walking sticks gave us some confidence. We then walked on for another hour up to a gradual incline along the valley with views of a sheer drop into the river. We then came to an open space which was our pit stop for the night. A lovely campsite, which when we arrived was filled with a lot of sheep grazing, a tiny stream running through it, and surrounded by the high mountains.

We felt a little strain due to the altitude and our heads did hurt, though some nice food, half a garlic along with some electral helped us quite a bit. Sleep was a stranger as well and we were all taking turns at walking about like zombies at night. Guess we were anxious for our climb to the peak and pass the next day. 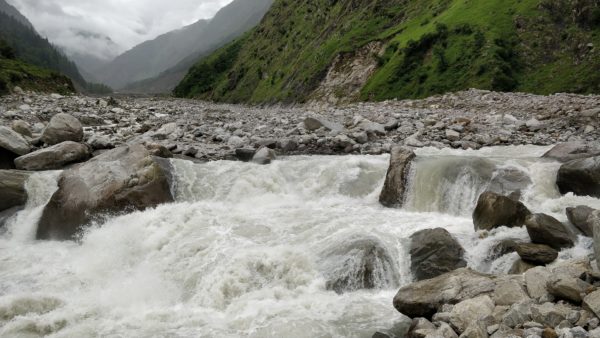 Another early beginning, and a day I don’t think any of us were prepared for. From the beginning, up until till we reached the pass, it was really steep. We struggled initially with the thin air and altitude. We did get into a rhythm and slow sure steps helped reduce the distance. The sun stayed away and so did the cold, the temperature was ideal. The views as we climbed included a lot more snow and the peak on the other side of the pass we were climbing. We got to the peak by 11:00 hrs, it took us nearly 5 hours for that climb.

After spending a few minutes at the top and taking in the view, we started our descent into the Kaza valley. The descent was quite tricky, because of the ice and man it was slippery. We tried sliding down using our raincoats, not too successfully as we could not stop our free fall. and when we tried walking down we fell down quite often as well, at least I did. This was a difficult part but also entertaining. Being clumsy on ice can be comical, but falling down on it is painful.

Once we completed the descent and reached the plains in the Kaza valley, the views were spectacular! Blue skies, the bright sun and the snow-peaked pass in the background. It was a long walk from the plains to the camping site at Chochoden. It was simple and straight with not too much inclines and declines. The walk was along the river again, but this one had brackish water. As the water mixed with the greyish sand, unfortunately, we forgot to fill water and had to struggle to the campsite with parched mouths. This last part was a fairly easy walk compared to the steep climb and struggling descent but it was long and never-ending. It was worth it, as the view was mesmerizing. The snow desert and its endless valleys just are really enchanting.

We camped at Chochoden as the wind picked up and hammered away at the tents. It was cold, but I guess we were just happy to have stopped walking.

After a nice light dinner and some hot soup, we were a lot happier and enjoyed the unbelievable sky. The stars are something us city boys never get to see, and the sheer number of stars was amazing, barring the cold I really had the urge to sleep outside the tent.

On route to the Pind Bhaba trek

Another early morning start, some jam sandwiches for breakfast to get the energy going, and we were ready and eager to get back to civilization and have a hot water bath. That and the internet being our motivation, we walked at a brisk pace as we headed to Mud.

The walk was really scenic but repetitive, with the valley, river and desert mountains forming an endless chain. The sunburnt us this day, it was really hot and we were tired, grimy, and dirty. I decided that I am going to push through and reach as fast as possible.

The walk was really easy with most of the terrain being flat. There were a few inclines which were tricky because of loose stones and gravels but in general, a really easy walk. It was nearly 10 kms of this terrain until we reached the last parts of the walk nearing Mud town, we saw Yaks, green meadows and the tiny hamlet perched upon a hillock.

To get into the main town we had to cross a river, which was a little difficult for the mules and fun for us. A suspension bridge strung with prayer flags, and then a short steep uphill climb to civilization, telephones, and a mirror! 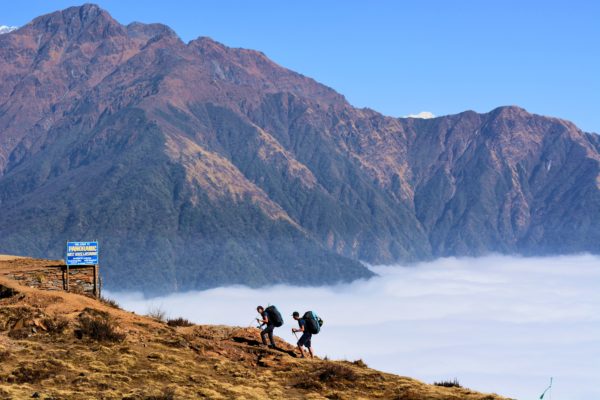 This was a fantastic trek which took us through so many different facets of the mountain, from its forests, meadows, snow, heat, rubble, and all of this in 4 days. For any nature lover looking for an adventure, this mountain trek is perfect. We had a great experience with My Himalayan Adventure.