Travellin in different train classes in India and the food.
4.8 rating based on 1,234 ratings

Travelling in different train classes in India and food

Magdalen and Brian, our American guests ,did a three week tour across North India. They were most excited about travelling by Indian trains and wanted to use them extensively.

During our 3-week India trip, we took trains for much of the travel we did.  While we were at it, we learned a lot about trains in India.  The short story: Trains in India are fantastic.

A quick note about prices – most of the prices listed here were specific to our experience (or estimates of our experience). We traveled in the summer of 2015. Prices may have changed since then – when you are reading this. But just keep in mind, this was our experience. 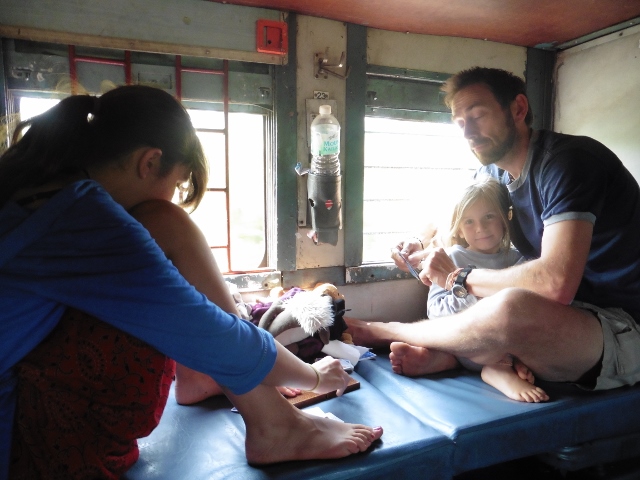 Train travel in India – Old coaches, but alot of fun!

In planning our trip, we made sure to book trains of a variety of different classes. We did everything from a fancy first class AC overnight car to the reserved seat non-AC car. We did not do the lowest class, the ‘general population’ sleeper car. All in all, we found trains to be a safe, affordable, and easy way to travel.

There are some great resources out there for much more detailed accounts of the various classes or tips on how to book trains – for this blog, we just wanted to describe some of our general experiences.

First, the reserved seat non-AC car. We took this class from Agra to Delhi in the early evening.  The ride was about 4.5 hours long. The train arrived in Agra on time and got to Delhi pretty much on time. The car holds perhaps 90 people or so. All of the seats are labeled, so you just check your ticket for your assigned seat. When we arrived, someone was in our seat, and they moved after we politely asked.

Throughout the journey countless food vendors walked up and down the car selling food More on food in trains later. This ride cost us Rs 223 total for two people. It was quite economical.  There were people standing up in the aisle but there was space for our bags in the overhead rack. Since there is no AC, all of the windows were open, which made the trip quite loud. If you bring a pair of earplugs you will probably use them. There were plenty of fans on the ceiling.

On one of our trips during the day we rode in a ‘chair car.’  We were both a bit worried this wouldn’t be an AC car as it doesn’t explicitly say ‘AC’ in the title (whereas other classes are specific). Turns out this car looked and felt like a train car in Europe or the US might look and feel. There were 6 seats across with an aisle down the middle. The chairs reclined some and yes, there was AC. 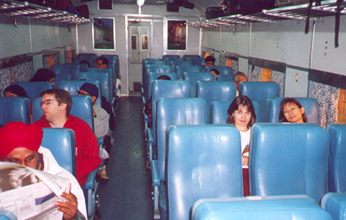 Next, we took the 3-tier and 2-tier AC cars. Both of these are sleeper cars. The main difference is the number of people in the car. The 3-tier has more people & fewer privacy features. Essentially the car is divided up into rooms (minus walls) where there are berths of beds. The beds can be changed into seats as needed. 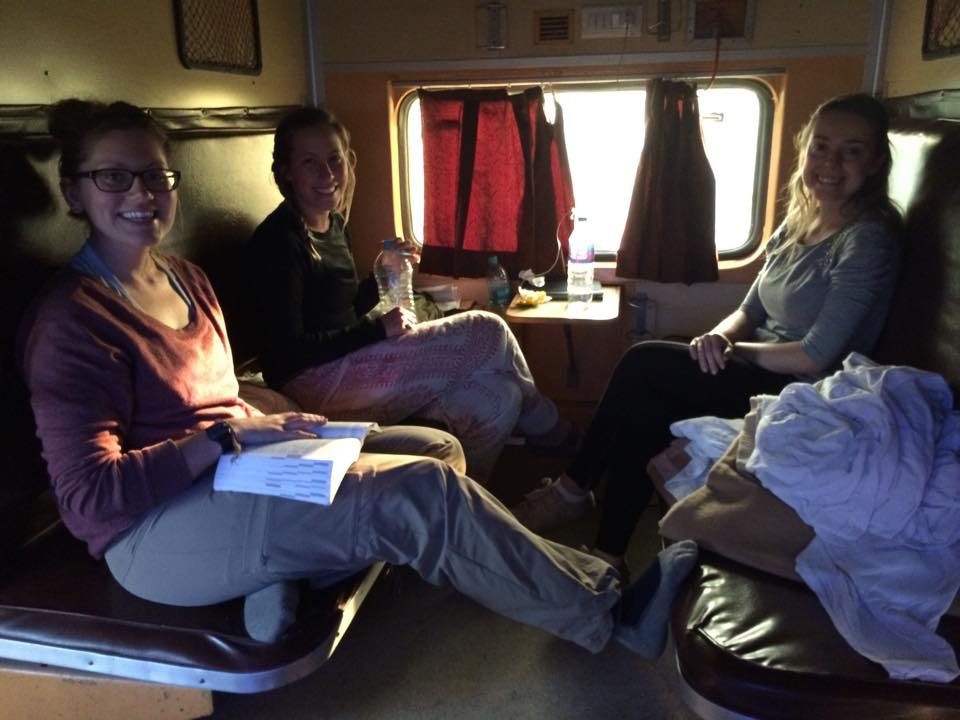 Typical 3 Tier A/C (3 AC) – The backrest folds up into the middle berth!

The 2-tier AC means that if it’s daytime there are two people who might sit on the bench, and none of the beds are folded up. In the 3-tier AC the middle bed is folded up during the day so that people can sit upright on the bottom bunk. In the 2-tier the top bunk does not fold up. 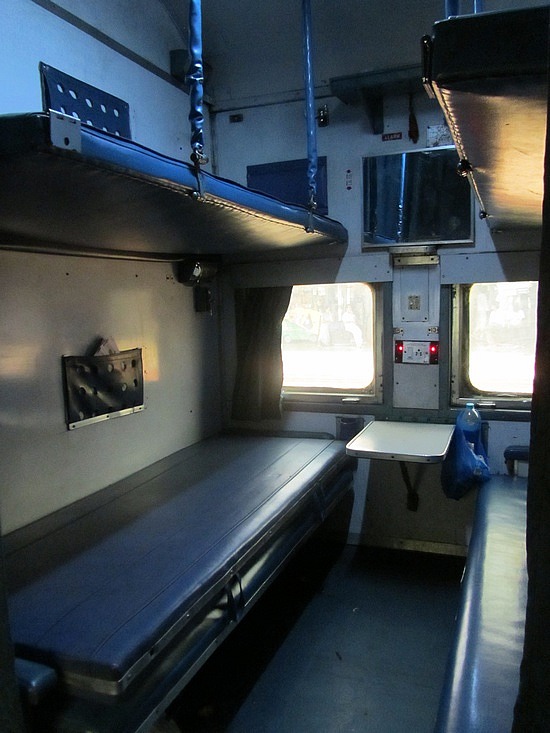 Finally, we took the 1st class AC car for a ride from Udaipur to Delhi. For just under 6000rs (for two) it was the most expensive journey we took. We were happily surprised to find we got a private room assigned to us. Two beds behind one door. It was a cute little ‘home’ for the 12.5 hour journey. There was a bell to ring for the attendant to come down and make the bed or help with whatever task. Upon arrival in Delhi, bag porters were knocking on our door to help with our bags.

All you need to know about food on Indian trains

We found this to really vary from train to train and station to station. Sometimes, we were bombarded by tons of food sellers. 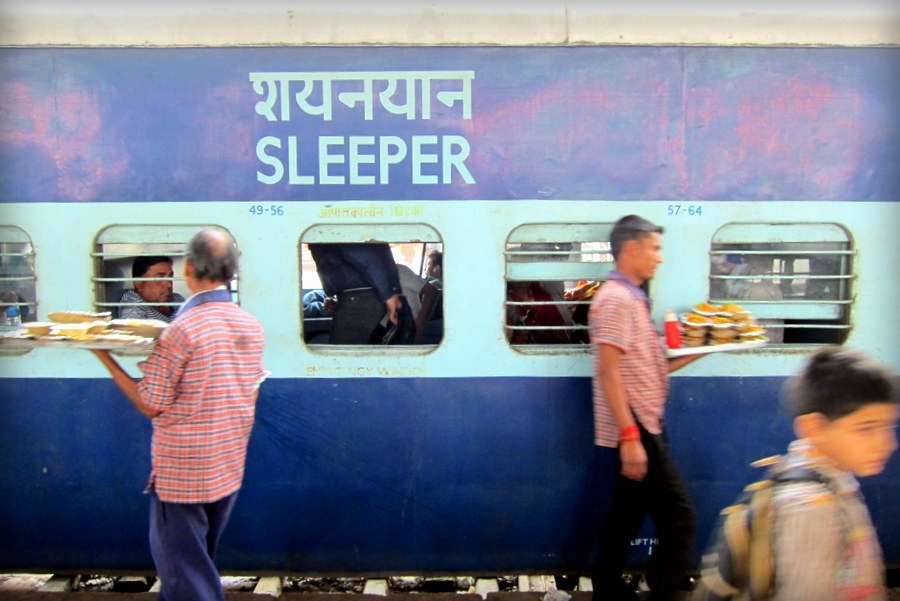 On the drinks side, they sell everything from cold bottled water (20rs) and other cold drinks to milk masala Chai (10rs) and coffee (not sure what this really was). We found the guy saying “Chai Chai” had better chai than the guy saying “Chai Coffee.” We think the Chai Chai vendor has pre-brewed & sweetened masala chai, whereas the chai coffee vendor has boiling hot milk, tea bags, and instant coffee mix. Obviously the pre-brewed & sweetened masala chai is better unless you want coffee.

On the food end of things there also was quite a range. There were the guys selling chips, biscuits/cookies/crackers, and other small snack items. Then there was the guy selling two types of patties – we think one was made out of dal – the other could have been potato or chick pea. Either which way, the patties were 10rs or so.

Next up, the Tomato Soup guy.  In our opinion, this was the best.

First off- the way they said “Tomato Soup!” just made us grin ear-to-ear each time we heard it.  Then for 20rs to get a small cup of super tasty Tomato Soup (with really yummy croutons in it, it was just amazing.

Next up were the guys selling vegetable cutlets and other types of cutlets.  We tried a veg cutlet once. It was two pieces of some sort of breaded spiced potato “cutlet” and two pieces of buttered bread. If you were starving (which we were) this is good enough. Otherwise, we would skip it next time. We seem to remember the price was 20rs. There was a guy selling omelets, but we did not try it.

Finally were the guys selling full meals on our overnight trains. I think this might have just been for the upper classes (we only saw it in First & 2 Tier AC classes). For 150rs you get a full thali plate. There was a dal, a potato dish, and a paneer dish. This was served with chapatti (which we found to be too thick, cold, hard and not appetizing), rice, a gulab jamun and a plastic spoon.  All in all, the meal was good enough with plenty of spice and it felt fresh and hygienic enough (it was a tray sealed with plastic). 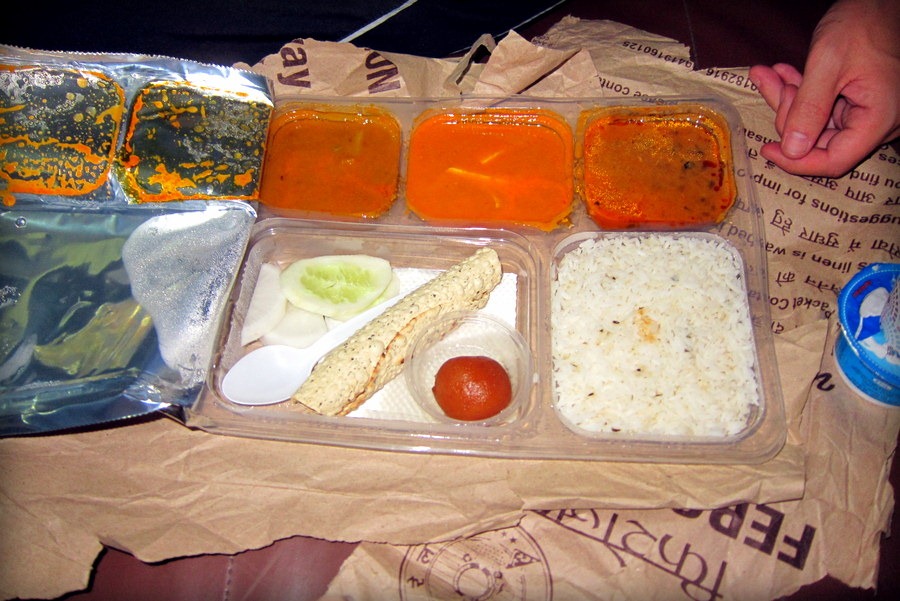 Read more about train and bus travel in India – North India by bus and train, experience of three young backpackers 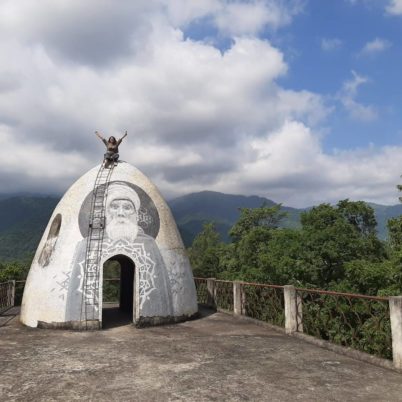 THINGS TO DO IN RISHIKESH

Want a break from your monotonous stressful city life? Rishikesh is th..... 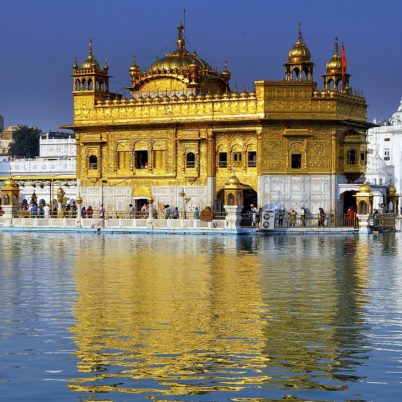 Things To Do In Amritsar 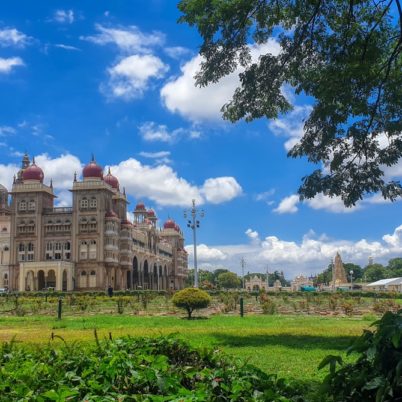 Things To Do In Mysore

Most of us are familiar with the famous tourist destinations in South ..... 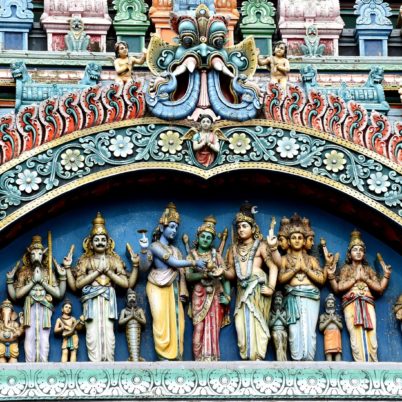 Things to do in Madurai

Madurai is known as the ‘Athens of the East”. This charming city i..... 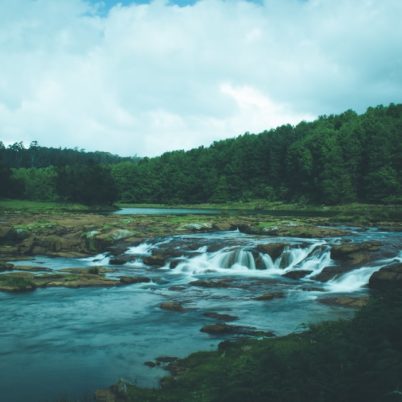 Things to do in Ooty

Located in the Nilgiri (which means blue) district is Tamil Nadus most..... 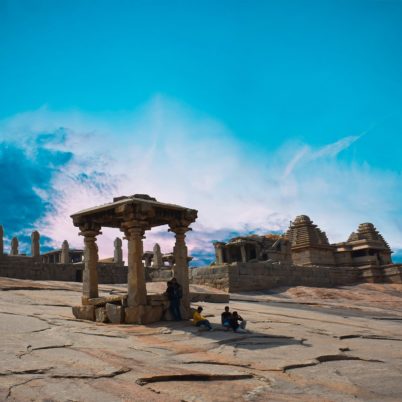 Top 10 things to do in Hampi

Hampi is home to some of the most splendid remains of a powerful kingd.....

Payment by credit card The fastest and easiest way to pay us is via c.....

One of the more popular and absolutely fantastic tiger reserves of Ind.....