If you seek Fame go to India - India Someday Travels
4.8 rating based on 1,234 ratings

Home » If you seek Fame go to India

If you seek Fame go to India

Sir/Ma’am, can we have a picture with you?

Sarah and her family from Canada are travelling with their children aged 12, 10 and 5 for a year across Europe and Asia. They used our help to plan parts of their India trip and are guest authors of a series of blogs on travelling in India with children. This one talks about if you seek fame go to India.

Of course, from Canada, we knew about Bollywood and we had seen some or parts of Bollywood movies. We knew the Bollywood scene was in Mumbai. What we didn’t know is that we could BE in a Bollywood movie. We actually were asked not once, but twice, if we wanted to come to the film set as extras. It seemed that the only requirement was that we were Caucasian. That’s when we say, if you are seeking fame go to India.

The first time we were asked was to star in a film with the actor Khan and the second time, we were asked to sit in a café (onset) in a Pepsi commercial. Now regrettably, for my 12-year-old daughter, we had to turn down the offers both times. We had travel plans and we weren’t prepared to change them.

The money earned wasn’t much, 500 rupees ($10), with lunch and meals provided, as well as transportation. We would have to be on set for about 12 hours. With younger children (in addition to our 12 year old), this wouldn’t be easy to negotiate. The experience, however, would have been pretty cool–if only once.

Feeling like we had just missed out on our three seconds of fame, we headed off to the Ellora and Ajanta Caves. My eldest daughter doubted that the caves could possibly be as exciting as taking part in a Bollywood film. We’re not sure what the verdict is but certainly while being at the caves, we felt as though we were famous.

When we walked in, we saw signs about not bothering people by asking them to take photos. Initially, I assumed this was directed at us, the Foreigners, but it turned out to be directed at the Indian tourists. They are very eager to have their photos taken with foreigners.

As we had children with us, and the youngest being a 5-year-old blond girl, we walked around the caves like movie stars followed by the paparazzi. 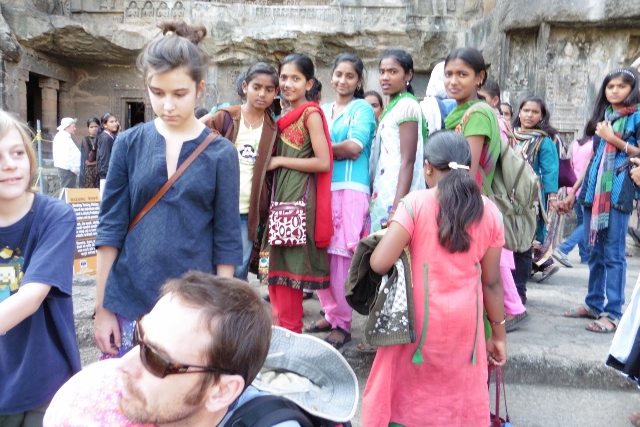 We were asked probably over 100 times if we could have photos taken of us. The biggest target was our youngest daughter. She was asked non-stop. In fact, she started to hide behind us. When we said yes to one person, others would run over and start snapping as well.

I had my first taste of what it must feel like to be famous. So as we walked around the caves, I channelled my inner Angelina Jolie, stood up straight and smiled, many, many times over.

The experience was more funny than bothersome. Needless to say by the end of the day we had strategies to lessen the attention. The caves at Ellora and Ajanta are absolutely mind-blowing. We would highly recommend the trip.

What people were able to create two thousand years ago is really beyond comprehension. We didn’t get too baffled, however, by this incredible and miraculous work of ingenuity because we always had another photoshoot around the corner. 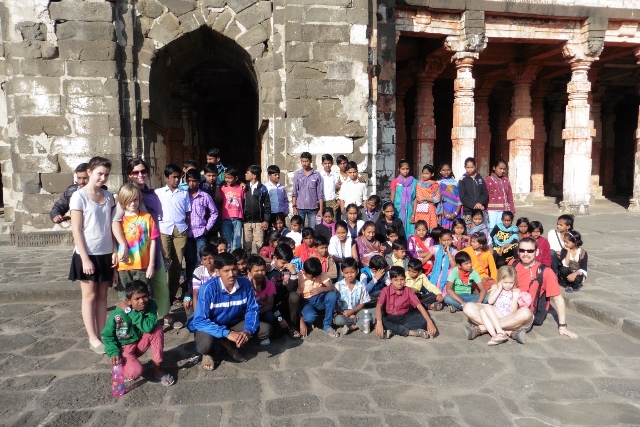